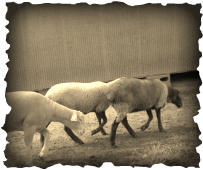 Raising— Growing— Selling one lamb & kid at a time.

In 2008 we had our first taste at raising our own lambs to show and sell—the selling part was the hard part, since most of the sheep that we showed were market lambs.

In 2009 we became a part of an American heritage, After purchasing a Hobby Farm magazine that had featured a California Red in it, we set out to learn more about these beautiful red headed sheep – Traci contacted Lyn the President of the California Red registry and began a year long process of selecting 4 ewes and 1 ram to bring back to Nebraska to start our very own flock.  In May 2010, Traci along with her husband Mark and their two oldest daughters traveled to New Mexico, where they personally Met Lyn and Jerry Brown, breeders of 20+ years of California Reds.  We loaded up our 4 ewes and Ram and headed home.

We feel lucky, not only do we have black face and red heads, but in 2010 we also added a white face purebred, registered dorset ewe to our family flock.. As you can tell, we are NOT a prejudice family.

To make our farm more diversified in 2012 our son decided that he would rather show goats instead of sheep, so his first year in 4-H he showed his first 2 does Tom and Gerry at our local county fair and won GRAND Champion and RESERVE Grand Champion with those two and thus the start of our newest goat adventures.

2015 has brought yet another new adventure, Emerald, a purebred Toggenburg that my daughter purchased for an FFA project -  she hopes to do many things with her milk including helping us with any bummers we may have in our future.               Disaster came with her project in May 2016 Emerald passed unexpectedly, but out of Disaster comes another Toggenburg - Throttle -  Who was shown at the Nebraska state fair and received -2nd purple in yearling class with best overall udder in yearling class.

​After realizing our love for our California Red sheep in 2016 we sold all our white face, blackface and speckle sheep to make more room and to concentrate more on the reds. In 2020 we decided to add more 'REDS' just a different breed, we added Registered Tunis to our lineup of sheep.

Whether it be goats or sheep that you are after— or if you are just after the wool or the meat or maybe just some farm fresh milk - we have it here in our little corner of the country.

IN MEMORY OF MY MOM;
you will always be CEO